His first story, “The Planetoid in the Case: A Matter of Unnatural Law” appeared in the Oxford SF Group’s magazine SFinx (1973); he began publishing stories professionally in 1977. The Spiral series of science fantasies started with Chase the Morning (1990) and included The Gates of Noon (1992), Cloud Castles (1993), and Maxie’s Demon (1997). He also wrote standalone historical fantasy The Lord of Middle Air (1994).

Rohan was born January 22, 1951 in Edinburgh. He attended Oxford University, where he studied law, graduating with a masters in 1973. At university he joined the Oxford SF Group and met his future wife Deborah, an American post-graduate student, married 1977. During college he worked variously as an editor, librarian, technical writer for software, and translator, and after graduating spent five years editing encyclopedias before going freelance. After living in Oxford and Yorkshire, Rohan began splitting his time between Cambridge and Edinburgh.

Rohan mostly gave up fiction writing in 2000 after being diagnosed with an incurable illness, but continued to write non-fiction (including columns on classical music for various magazines) and to travel extensively.

The Encyclopedia of Science Fiction

The Scots sf and fantasy author Michael Scott Rohan died in hospital in his home town of Edinburgh on 12 August 2018; he was 67. Although his first novel Run to the Stars (1983, pictured) was a lively science-fiction adventure, his considerable reputation rests mainly on the Winter of the World fantasy sequence beginning with The Anvil of Ice (1986) and the Spiral science-fantasies beginning with Chase the Morning (1990).

Speaking personally, Mike Rohan was an old and valued friend (we first met at the Oxford University SF Group in the early 1970s) whose unexpected death leaves an aching hole in the world.

Michael Scott Rohan, author of a number of highly regarded fantasy and sf novels, died on Sunday 12 August, after years of illness. He was 67. His most highly regarded novel, The Anvil of Ice, was published in Gollancz’s Fantasy Masterworks series in 2015, and all his fiction is published electronically by SF Gateway. His friend and sometime collaborator Allan Scott remembers him:

Michael Scott Rohan was my best and oldest friend – and not a man to be summed up in a few words. His passion for music – especially opera – was only matched by his voracious appetite for science fiction and fantasy, his deep and abiding love of mythology (especially Norse mythology) and his uncanny ability to discover, and remember, huge chunks of factual information. All those passions were reflected in his writing: the Winter of the World series (1986-2001) began as his take on the legend of Völund the Smith, and he happily confessed to stealing several scenes, wholesale, from the operas he loved.

Mike’s writing career began at Oxford, where he published his first story (The Planetoid in the Case) in the University Speculative Fiction group’s magazine Sfinx, which I was editing at the time. It was almost the only use he made of his law degree. We were both founder members of the Pieria writers’ group, which included, among others, Robert Holdstock, Garry Kilworth, Andrew Stephenson, David Langford, Ian Watson, Richard Evans and John Jarrold.

Mike’s first job – as an encyclopaedia editor – was perfect for a man with an insatiable appetite for information, but he wasn’t happy there and left in 1978 ‘to save his frontal lobes’ and start work on his first published novel, Run to the Stars (1983). Our shared passions for mythology, Viking history and archaeology led, inevitably, to our first collaboration, a supernatural thriller called The Ice King (1986). His first Winter of the World books soon followed, drawing praise from one of Mike’s own favourite writers, Ursula Le Guin: ‘. . . an absolute knockout . . . it looks like there’s one to watch!’ They also – deservedly – won the Crawford Award.

And as with much of his writing, new discoveries suggest that his interglacial civilisation may be more than a fantasy…

Mike’s Spiral series was born from memories of his native Edinburgh and his love of the sea – at a point where he’d almost vowed to give up writing fiction altogether. In his own words: ‘Approaching Edinburgh from the southern hills, you see its great river estuary, the Firth of Forth, stretched out before you in an endless sequence of bays and islands. I could imagine a ship sailing away among them to infinity – with a crew of immortals, and one very ordinary man among them.’ With more than a nod to The Flying Dutchman, he produced another powerful trilogy between 1986 and 1990 – pausing only to collaborate with me on a ‘fantasy romp’, Spell of Empire (1992), which started life as a game novelisation and then developed a life of its own. (Two supporting characters are our caricatures of each other . . .)

The Lord of Middle Air (1994) recalls the supposed sorcerer Michael Scot, whom Mike claimed as an ancestor – but after completing three more novels in the Winter of the World series, his increasingly poor health compelled him to abandon fiction writing altogether.

Fantasy’s loss was music’s gain. Mike’s enormous and ever-expanding CD collection (which at one point I suspected might take over his Cambridge house) was further fed with review copies as he became a respected contributor to Music Magazine, Opera Now, Classic CD, International Opera Collector, The Gramophone, and later the BBC Music magazine. His prodigious memory served him well when comparing recordings, and even though one ear had been ‘kicked into touch’ during a schoolboy rugger match the remaining one was keen, and critical. He and his wife Debby travelled the world in pursuit of good opera, and in his last years he happily returned to Edinburgh.

The website he and I created is (by some minor miracle) still up and running at http://www.users.zetnet.co.uk/mike.scott.rohan. It tells much of this story in (mostly) his own words. Which – like Mike – are witty, entertaining, knowledgeable, and worth every minute it will take to read them.

His entry in the SF Encyclopedia follows:

Scottish publisher, editor and author with a degree in law, with Elsevier International Publishing 1973-1978 and since freelance. Following a fiction debut with “The Planetoid in the Case: A Matter of Unnatural Law” in the Oxford University SF Group’s Amateur Magazine SFinx #7 for January 1973, he began publishing sf professionally with “Fidei Defensor” in Andromeda 2 (anth 1977) edited by Peter Weston and “The Insect Tapes” in Aries 1 (anth 1979) edited by John Grant. Nonfiction books include a study of the Viking era, The Hammer and the Cross (1980 chap) with Allan Scott, and an introduction to home computing, First Byte (1983); he also reviewed for Opera Now. His first novel was Run to the Stars (dated 1982 but 1983), signed Mike Scott Rohan, a promising Scots-in-space Hard SF thriller featuring relativistic Weapons and an Alien message, with nasty Earth bureaucrats ready to attack their own space colony. Then, like several UK writers of the period, he began genre-crossing; most of his subsequent fiction was Fantasy – the genre in which he seems most at home – beginning with The Ice King (1986; vt Burial Rites 1987) with Allan Scott under the joint pseudonym Michael Scot, a supernatural thriller involving Norse Mythology and, specifically, the Norse version of the walking dead or Zombies: draugar. There followed the more notable The Winter of the World sequence beginning with The Winter of the World, Volume One: The Anvil of Ice (1986), set in an invented frozen world imagined in some depth; though the writing is sometimes floridly rhetorical. A young smith with the ability to create Technofantasy artefacts sets himself against the entropic Powers driving the oncoming Ice Age; quests follow; spring comes, but at a cost, which the fourth and later volumes detail down the generations. Devices employed against the Ice include a weaponized blast furnace and the titular tool of The Winter of the World, Volume Three: The Hammer of the Sun (1988), in essence a tactical nuclear Weapon.

Rohan then made a partial return to a kind of sf, in the jaunty, romantic Science Fantasy Spiral trilogy, comprising Chase the Morning (1990), The Gates of Noon (1992) and Cloud Castles (1994), where reality intersects with a system of increasingly magical Parallel Worlds known as the Spiral and the Core (see Science and Sorcery), and a Computer program can be used as a spell. The series is intelligent, well thought-out, and surprisingly full of acute observations about Near-Future Politics. A second fantasy collaboration with Allan Scott, A Spell of Empire: The Horns of Tartarus (1992), was published under their real names. But perhaps Rohan’s finest work is the solo historical fantasy The Lord of Middle Air (1994), set partly in the Border area of thirteenth-century Scotland and partly in a very convincing land of Faerie. In this tale a young Scots chieftain encounters and has his life changed by Michael Scot (1175–circa 1232), who like several other real-life scholars of the past acquired the reputation of being a magician – a belief here literally true. (Rohan claimed Michael Scot as an ancestor.)

Rohan consistently grew in stature as a writer throughout his active career, but owing to illness fell silent as a novelist after Shadow of the Seer: A Winter of the World Novel (2001), the sixth episode in that series. He continued to write about classical opera.

ROHAN Michael Scott (Edinburgh)
On August 12, 2018, at Western General Hospital, after a long illness, Michael, educated at Edinburgh Academy and Oxford University, lived many years in England and returned to Edinburgh in 2015. He leaves a beloved widow Deborah, a dear sister Marise Larkin, her two children and two grandsons. There will be a private cremation. Donations to Kidney Research UK, Scottish Opera or Linton Zoo in Cambridge would be welcome.

News has unfortunately broken that Scottish fantasy author Michael Scott Rohan has passed away at the age of 67. 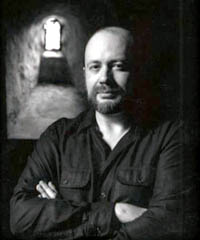 Rohan was born in Edinburgh in 1951, apparently in the house next door to one where Robert Louis Stevenson resided. He attended Oxford University, where he started reading English but switched to Law, and got involved in an SF group. His first published work of genre interest appeared in the group’s SFinx magazine. His first published story was “Fidei Defensor” (1977) in the anthology Andromeda 2 (edited by Peter Weston), which attracted praise from no less a personage than Ursula K. Le Guin (“an absolute knockout!”). A writer with widely varying interests, he co-wrote (with Allan Scott) a nonfiction study of the Viking era, The Hammer and the Cross (1980), and also wrote reviews for Opera Now. He also developed an interest in the home computing scene and wrote an introduction to the field, First Byte (1983), and sang and played guitar in a folk band.

His first novel was Run to the Stars (1983), a hard SF story, which was followed by a switch to fantasy with The Ice King (1986, with Allan Scott). The same year he published The Anvil of Ice (1986), the first in the Winter of the World series, which remains his best-known work. Five additional novels in the sequence followed.

Rohan returned to SF with The Spiral, a four-volume series set in a series of interconnecting parallel worlds, featuring such ideas as computer programs that can be used to empower magical spells.

Possibly Rohan’s finest novel is The Lord of Middle Air (1994), a stand-alone which melds the history of 13th Century Borders Scotland with a fictional faerie realm.

Rohan’s writing career was abruptly curtailed after the publication of the sixth Winter of the World novel in 2001, after he had been diagnosed with an incurable disease. He decided to dedicate the rest of his life to his family and to travelling, including visiting both Antarctica and the Arctic. Occasionally his publishers hinted that he was writing another fantasy novel, but alas none appeared.

This is sad news. Michael Scott Rohan wrote with skill and a poetical flourish, and showed an enviable proficiency across the fields of criticism, science fiction, fantasy and historical fiction. He will be missed.

This site uses Akismet to reduce spam. Learn how your comment data is processed.