A memorial service for Mike was held at the Friends’ Meeting House in Oxford on 29 October 2018 – in the room where he and Debby were married.

If you were not able to attend, Debby has suggested you might care to contribute to one of three charities in Mike’s memory.

Want to say something about Mike? Share a memory – or leave a comment about his work? Then…

MSR in his own words…

Michael Scott Rohan was born in Edinburgh in 1951, next door to Robert Louis Stevenson’s house (he was out). His father, from an old French family, was born on Mauritius, educated in France, studied at Edinburgh University, and joined the British Army in World War II; his mother came from an old Border farming and cattle-stealing family.

From an early age he read voraciously, everything from Dan Dare to the Larousse Mythology, Conan Doyle, C S Lewis (Out of the Silent Planet, not Narnia), Tolkien and his older sister’s copy of Lady Chatterley. He was educated at the Edinburgh Academy and St Edmund Hall, Oxford, where after entering in English he made the great mistake of studying law, but was sensible enough to join the SF group. There he met its president Allan Scott, who (along with terminal boredom) started him writing for the group’s semi-pro magazine SFinx alongside such luminaries as Rob Holdstock, Ian Watson, Dave Langford and Andrew Stephenson. He also seized on an innocent young American called Deborah, a Philadelphia-born Stanford postgrad, who wandered into the group, and they began finding excuses not to get married.

An erratic range of casual jobs before, during and after college ranged from OTC (laughable) to librarian, software technical writer, editor, translator, and shipping rare botanical specimens around the world (they’ll find them any day now).

After getting his MA in 1973 he escaped the law to join an international publishing firm. There he spent the next five years editing encyclopaedias and other reference books under a boss with surplus chromosomes and the charm of a psychotic rhinoceros. Among his fellow-sufferers were Paul Barnett, now aka Thog the Barbarian (and SF novelist and encyclopaedist John Grant), and Maggie Gee, mainstream novelist now displaying SF influences. He joined the Pieria writer’s group established by Stephenson and Holdstock, with SFinx authors and others including Garry Kilworth and Chris Morgan, which had major influences on his early writing – those usually known as ‘humiliation’ and ‘shredding’. Nonetheless several of his short stories got themselves published in British and US anthologies. Meanwhile, in 1977, he and Deborah ran out of excuses.

In 1978, as the longest surviving company editor, he took voluntary redundancy to save his frontal lobes and began writing his first non-fiction book, The Hammer And The Cross, with Allan Scott, and his first novel, Run to the Stars very much on his own. He never looked back, in case something was following him. 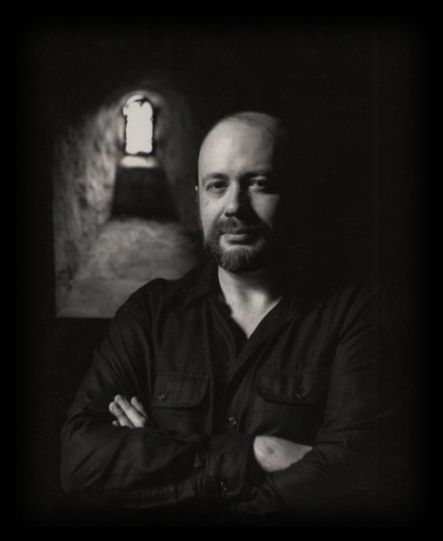 Photograph © Patti Perret, from Faces of Fantasy (TOR, 1997). Taken in the 10th-century crypt of St.Peter’s in the East, St Edmund Hall, Oxford. (He let her out eventually.)

Have a memory, a story about MSR, or a comment?

…and (partly) in other people’s words…

MSR’s other interests were equally peculiar, ranging from anthropology, history, archaeology – he took part in several digs – and palaeontology, to cinema, hifi and home entertainment. For two years he was a columnist for the London Times. In his youth he joined the hunt for the Loch Ness Monster, but was struck by a flying saucer. A music freak, he briefly played guitar and sang in the world’s worst folk-rock band (official), and was offered operatic training, which is probably as close as you get to a definition of total failure. He also found (reasonably) gainful employment as a music journalist, a columnist and reviewer for Music Magazine and Opera Now in its first two years, and as a regular contributor to Classic CD, International Opera Collector, and others, as well as creating and editing The Classical Video Guide (1994). He always insisted that ‘classical’ music should be as popular and accessible as any other kind. His favourite composers were too many to mention, but he was an authority on opera, especially Wagner, and had a soft spot for Mozart, Sibelius and Russians such as Mussorgsky and Rimsky-Korsakov. He spoke French and German, plus feeble smatterings of other languages such as Finnish, but never quite got the hang of Russian (despite earning 8 out of 10 for effort…)

With his wife Deb, now happily retired but formerly Archives Conservator for Cambridgeshire, he was an occasional and myopic archer, and they shared a strong interest in wildlife conservation (support the Durrell Wildlife Conservation Trust, folks!). After living in Oxford, they moved to Leeds in 1984, and in 1994 to a small village near Cambridge, where they lived next door to the pub. (Luckily the peasants with torches didn’t find out).

From fantasy to music…

After writing the Spiral trilogy Mike returned to the Winter world with three further stories, the last – Shadow of the Seer – published in 2001. By then he had serious health issues that made it impossible for him to continue his fiction career. Fantasy’s loss was music’s gain – he continued to write authoritative and incisive reviews for the music press, most notably for The Gramophone and for the BBC Music Magazine. In 2010 he and Deb bought a flat in Mike’s native Edinburgh, and in 2017 they moved there permanently.